“The only thing that is constant is change.”

Holding true are the changes in my life this year. I’m looking forward to the homecoming of one who has been gone so long, and in June welcoming home my new granddaughter. In April I said farewell to my Dad who passed some creative talent genes to me along with the desire to make beautiful things.

Joining The Station Gallery and meeting new artists whose talents inspire me is another positive change and there will be more this year including the passing of another decade milestone.

Following the completion of last summer’s challenge by Photographer/Artist Robbie Craig to create in their artistic medium a representation of his photo of the aurora borealis, I have set four new challenges for myself in 2016.

In mid December I learned of an artist who put out a call to weavers from around the world. American conceptual artist Helen Mirra was organizing an exhibit titled “Standard Incomparable”. Weavers were to submit two identical pieces with specific parameters. Each piece was to be an arms breadth wide and an arms breadth long. Each piece was to be divided into seven equal stripes. The stripes could be differentiated by either colour or pattern. The pieces were to be minimally finished with a rolled hem. The yarns used had to be locally obtained and undyed. Did I mention my entire family was coming home for two weeks at Christmas? I had to find these yarns. The pieces were to be at the Isabella Stewart Gardner Museum in Boston by February 27. I had researched patterns and had several potentials selected, ones that would showcase the yarns. By mid-January I had found two local yarn sources, beautiful wool and mohair blends, one light in colour and one dark.

Having the yarns I could now determine the sett (the number of threads per inch). After finalizing the patterns and the math I began the process. I wound the warp on a “warping mill’ (this keeps each yarn the same length and parallel). In taking the yarn from the mill you “hand crochet” the groups of yarn into a “chain”. After weighing the warp I began to “dress” the loom. The warp chain is loosely attached to the front of the loom. Each thread (408 threads) is put through the proper size-numbered “reed” (that keeps the yarns evenly spaced across the loom). The threads are then individually put through the heddles (a large ‘eye’ in a wire attached to the harness). There are four harnesses on this loom which allow for the design of different patterns. The yarns are then attached to the back beam and wound on with tension leaving the ends of the yarn at the front to be tied onto the ‘breast beam’. After checking for consistent tension some trial samples are woven. When all is satisfactory the weaving may begin.

Up to this point not including research and obtaining materials, several days work have occurred. I had set the loom to produce three pieces. One for the exhibit, one for exchange with another weaver in the world and one for me to keep to display with that weaver’s piece. I wove, washed, line dried and pressed the pieces. Where is that SAD FACE ICON? I was not happy. I waited several days, and fretted and looked at the calendar. I had so little time. I decided to redo the entire warp. 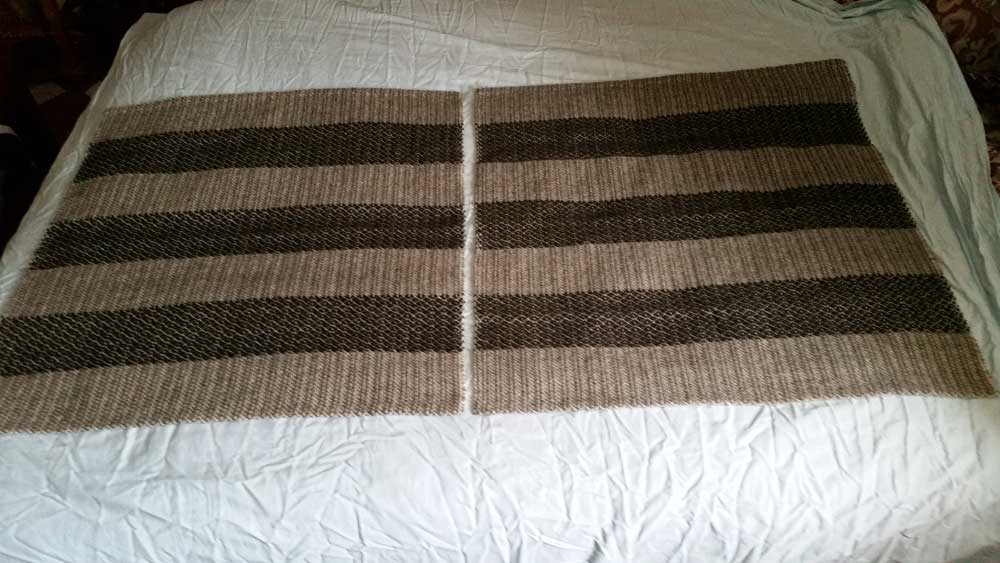 I started over, right from the beginning using a different technique. I’m glad I did. The second warp was remarkably better. I was amazed as I weighed and measured each piece, they were exactly the same size and weight to the tenth of an ounce. I packaged and mailed the pieces to Boston.

The exhibit will open June 4 at The Armory Center for the Arts, Pasadena, California, and will be opening September 21 , 2016, at Raffaella Cortese, Milan, Italy.

The collection in its entirety will be published. It is rewarding to be part of a collection such as this.

To improve my spinning techniques I have been practicing on my spinning wheel and spinning using drop spindles that were turned and carved by my Dad. I have sought out advice from the spinners in the Kawartha Hand Weavers and Spinners Guild and enrolled in a workshop at the WASOON Weaver’s Conference in Sudbury, May 2016.

I set a goal in December to reach 70 woven projects this year. That did not seem like such a monumental task at the time, but life has been nibbling away my creative time.

I am in the planning and gathering stages of my largest tapestry project, a homage to Canada as it celebrates its Sesquicentennial July, 2017. The piece has been ‘mapped’ out dimensionally and some technical issues investigated. I am really hoping to be able to complete this project as I may not be around for the celebrating of the 200th Anniversary.

I have been collecting images of each province to provide inspiration as well as materials of different colour and texture to interpret those inspirations: unspun yarn roving, hand spun yarns and specialty yarns of Canada, such as buffalo down and qiviut fleece (musk ox fibre) This fleece is picked from bushes where it gets caught or combed in managed settings. Qiviut is eight times warmer than wool and is softer and lighter than cashmere. It is priced around $125.50 per OUNCE! Canadian wool can be bought for $13.00 for 16 ounces.

That brings us to Chance, I don’t believe in chance but I needed a word to complete the alliteration so I checked with Mr. Webster and eureka definitions #6 “opportunity” and #7 “possibility” were the definitions I needed to make this work.

2016 is a year of opportunities and possibilities. I hope I can meet each of those calls with enthusiasm and perseverance!